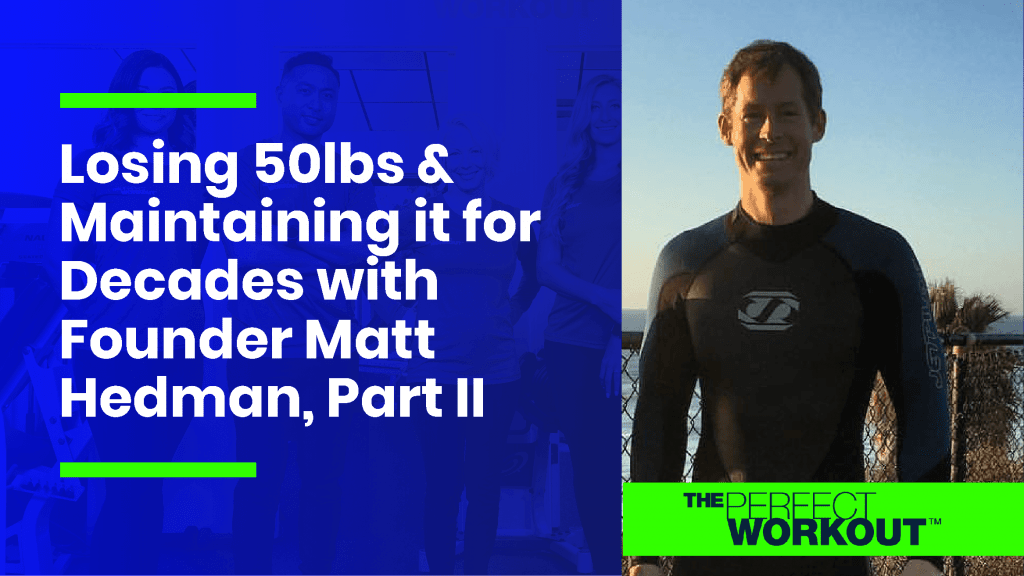 “I want to lose weight!”

We hear this every day in our studios, and chances are you’ve spoken those words too.

But have you ever said, “I want to lose weight, gain it all back and do it over and over again?”

Two of the most sought after goals our clients have are to: build muscle strength, and lose fat.

In fact, when Matt Hedman, the Founder of The Perfect Workout first began slow-motion strength training at the age of 20, his primary focus was to build bigger muscles, all while keeping his joints safe. But fat loss was a big part of his journey as well.

In Part II of this feature with Matt Hedman we discuss how he’s been able to safely and effectively build muscle and maintain a 50lb weight loss for decades.

One of the most common health and fitness goals in the U.S. and in our training studios is fat loss.

We’ve shared a lot of information on how our method, a form of High-Intensity Exercise is the most effective way to lose fat. But did you know it can be an extremely effective way to maintain fat loss too?

Losing fat can be a challenging feat, but maintaining the weight you’ve worked so hard to lose can be even more challenging.

In his early adulthood, Matt Hedman gained 50lbs, lost it, and has kept it off for over 27 years with slow-motion strength training.

“I have personal experience with this.

There was a brief period of time in the early 90s where I had 50 lbs more fat on my body than I do right now. One of the mistakes I made was force-feeding myself extra calories, thinking it was going to help me get more muscular. I got to the point where I was literally carrying 50 lbs more fat on me than I do today.

As far as exercise goes, these days strength training is all that I do. It’s been decades since I’ve done running in the name of exercise and I’ve been able to maintain the fat loss that I achieved.”

Doing aerobics or cardio exercises, like walking, jogging, bicycling, spinning or swimming are not necessary for fat loss, or to keep it off.

Many people enjoy doing these activities for fun. But if you’re a busy person like Matt, you may not be looking for extra activities to fill your time, especially if it doesn’t add much to your life.

“I’m not someone who can eat as much as I want whenever I want and not gain fat, because I have been heavier in the past. But really the hardest part is the maintenance and that’s been relatively easy for me.”

As we mentioned in Part 1 of this series, a book by Ellington Darden made a significant impact on Matt’s fitness journey.

Westcott’s second group, the aerobics plus strength training, got better fat loss results and instead of losing muscle they gained a couple pounds of muscle during the 8 weeks.

Darden’s strength training group averaged 18 lbs of fat loss over 8 weeks, which is almost twice as much as either of the other two groups. In addition they added slightly more muscle gain than strength training and aerobics group.

It may seem counterintuitive, but it is possible to lose a significant amount of fat and lose it fast doing just strength training for exercise 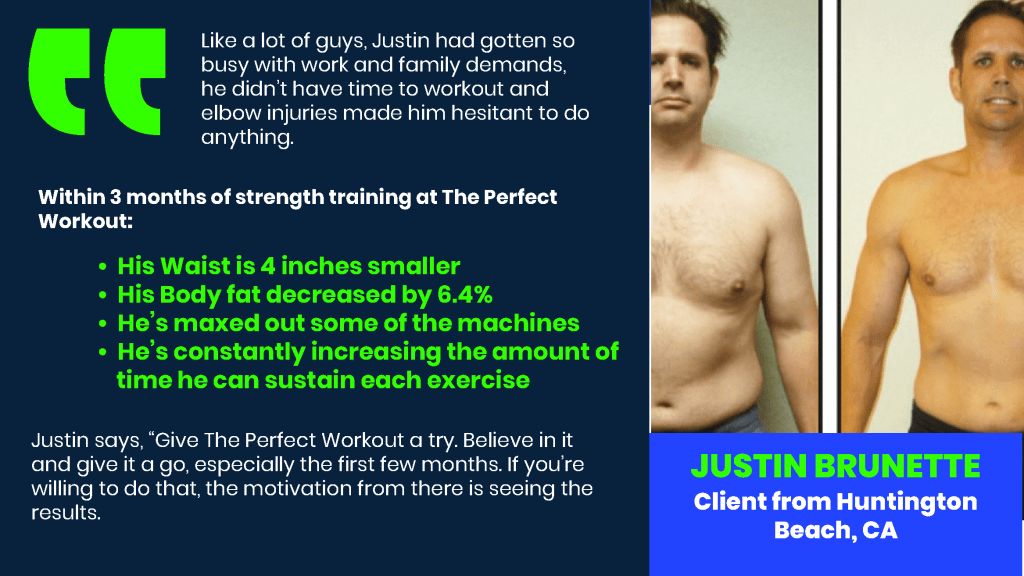 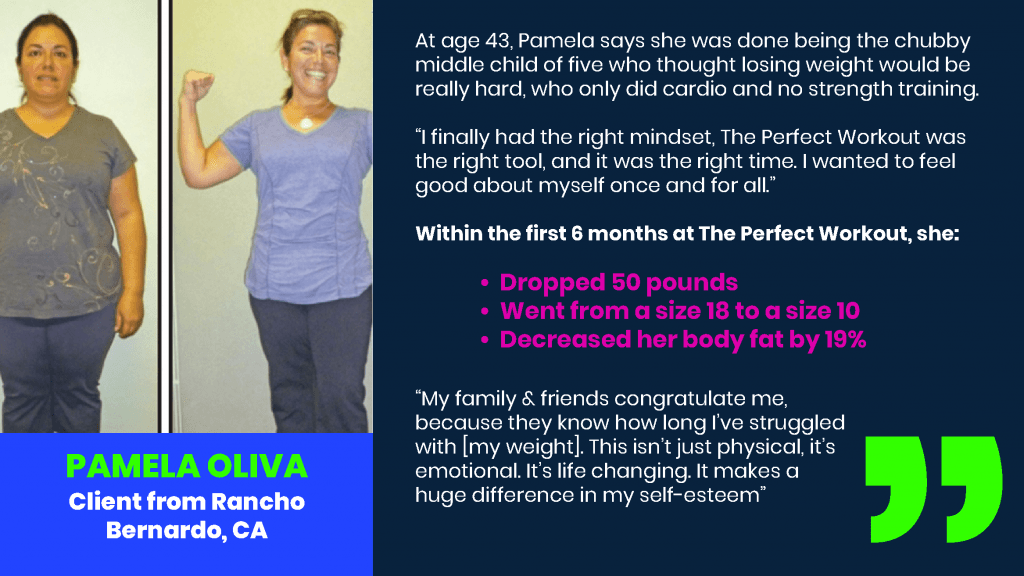 “But if a person’s going to do exercise, they’ll want to do strength training because it’s certainly going to give you the most bang for your buck, in my opinion, compared to low-intensity exercises, like walking and jogging.”

There are other things which strength training can do during the fat loss process as well, including helping with discriminate weight loss. Normally a person wants to lose weight, but they don’t just want to lose just any weight, they want to lose fat.

Like we saw in Darden’s aerobics only study, a reduced calorie diet plus aerobics only, resulted in [muscle] loss, and that’s what’s going to happen without  strength training.

“If I had to do it all over again, I would do effective nutrition, number one, and number two– effective slow-motion high-intensity strength training. Those are the two big levers in my opinion.”

Lifting weights helps people get stronger and add lean muscle tissue to their bodies, which is helpful in a number of different ways.

In slow-motion strength training, momentary fatigue in the muscles is really important. If you fatigue your muscles down to that point of “muscle success,” you’ve basically recruited all the different muscle fibers that are available.

If you do it well, you stimulate the muscles to get stronger and to add more lean muscle tissue to the body.

“That’s one reason why you don’t want to stop before you hit that muscle success point, especially if you got 90% of the way there, you might still be leaving some of that stimulus on the table if you quit at that point.”

We all want to add muscle to our bodies, but why is it so important?

The answer can be different for different people including their age, what they’re interested in, and where they are in their lives.

As people start to age, there’s something called age-related sarcopenia: the loss of muscle tissue.

Generally around the age of 25- 30, if a person doesn’t do effective strength training then they gradually start to lose muscle tissue. Some research states as we get into our 50s, 60s, and 70s, the rate of muscle loss can be faster.

That’s problematic for a number of reasons:

That’s something that all of us want to avoid.

Most people in our society are not getting smaller as they age into their 40s, 50s, 60s. People are oftentimes getting bigger. The amount of body fat gradually increases and the amount of  muscle shrinks.

Therefore, if we’re not actively strengthening our muscles, we are losing them, and likely gaining fat.

Matt describes the proper way to strength train on the Leg Press. This is one of the most impactful exercises we leverage in our studios. 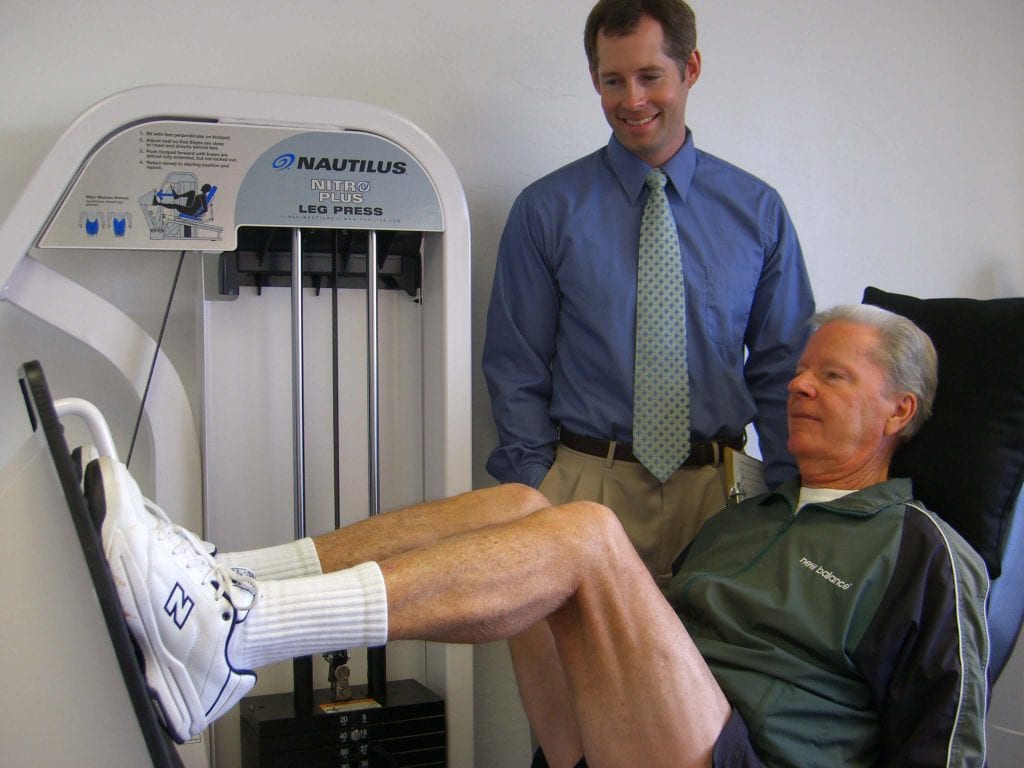 Once a trainer has assessed your body type and fitness level, he or she will decide the proper seat setting and weight to perform the exercise. Start with an Intro Session for this customization– it makes all the difference in the world, trust us.

Sometimes it’s easy to misjudge this. It might feel really hard on one repetition and you might think, “Oh, man, there’s no way I’m going to get another one,” but sometimes you can get the next one so you have to try as hard as you can. Even pushing for a couple or several seconds after it stops moving, just to make sure, can be a good idea.

“This point is called “muscle success.” Because fatiguing to that point is success. Once you achieve the fatigue of muscle success, you’ve done as much as you can to stimulate the muscles to get stronger and stimulate the muscles to, when they’re able to recover, to be able to add more lean muscle tissue to your body, and do all the wonderful things that strength training exercise can do!”

Think of hitting muscle success during a SMST workout as your ticket to winning the fat loss, strength gain jackpot.

If you don’t, you leave a lot of money on the table.

Misjudging whether or not you’ve hit muscle success is very common.

“In my experience, I’ve trained hundreds if not thousands of clients over the years. It might even be that most clients have trouble identifying that they’re there. They think they might be as fatigued as they can, when they might still be able to even finish a whole one or more repetitions.”

That’s where having a trainer right there to coach and encourage you is so valuable and so crucial.

It’s easy to misdoubt our own abilities. One of the most common things we’ve heard from clients over the years is, “My trainer pushes me [safely] to where I never thought I’d ever be able to go… beyond what I thought I was capable of doing.”

Again, that’s just one of the amazing things of having a coach right there telling you, “You’ve got a little bit more in you.”

We asked Matt Hedman what his favorite and least favorite exercises were, and why. Being someone who strongly values efficiency and effectiveness, there were some compelling reasons for his choices, and to no surprise, they had to do with maximizing strength and fat loss.

“The Lat Pulldown exercise. It’s my favorite I’ve ever used as far as the way the handles track and it happens to be one exercise where I’m pretty strong on.”

The Lat Pulldown machine primarily targets the Latissimus Dorsi muscles and another primary mover, the Biceps. “Those would be the prime movers, but believe it or not your chest is involved. It’s a climbing muscle and it’s actually helping you pull your arm down when you’re doing it. It uses your forearms too because you’re gripping. And of course your abs are definitely involved on this exercise.”

To some degree this machine hits the vast majority of muscles in the upper body.

“I’m not saying it hits them all optimally, but all of them are involved to some degree.”

If you’re going to do an upper-body exercise, this would be one to maximize your efforts on. Think of it as the Leg Press (or squat) of the upper body.

“A lot of people would disagree with this, and I’m totally fine with that… I personally hate doing abdominal exercises.”

A lot of people like abdominal exercises for reasons which aren’t actually happening on the exercise. They think it’s going to do something that it’s not actually gonna do at all.

For example, a lot of people will think it will lean out their midsection and make their abs look better. If you are lean enough then the abdominal machine can make your muscles a little bit larger, sticking through the fat a little bit more.

But unless the person already has relatively low body fat, it won’t do that.

The abdominal exercise itself won’t create the look of having “abs.” Overall fat loss in the body will.

What the abdominal exercise actually does is it makes your abdominals a little bit bigger, which, again, if you’re lean, it will make your definition a little better, but for folks which aren’t lean enough, it’ll just make those muscles a little bigger.

Most people like to include abdominal exercises because it doesn’t hurt anything and it makes those muscles stronger and firmer underneath whatever fat is there.

“For me personally, it burns so much for not a whole lot of good at least for what I’m going after.”

This doesn’t mean strengthening our abdominals is a waste of time or should be avoided. Having strong abdominals muscles can help to improve posture and help with low back pain, among other benefits.

So, if you love the abdominal exercises or want to incorporate them into your own routine, we’ve got the machine for you!

What you Need to Know to Lose Fat & Gain Muscle

It’s easy to over complicate the process of achieving your fitness goals. But if losing fat or gaining muscle are one of your goals, the solution is actually quite simple. Next time you feel frustrated or discouraged about your progress, remember these: